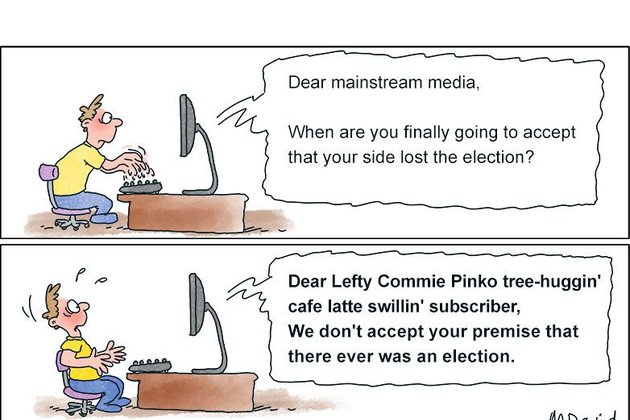 Why Australian journalists are at war with their audience

Australia's media is back-snapped broken but don't expect the most concentrated media industry in the world to fix itself, writes founder and publisher Dave Donovan and managing editor Michelle Pini.

TOMORROW, it will be 12 years since Independent Australia published its first article.

To be more specific, on 23 June 2010, the very first article was put up on independentaustralia.net, our beloved IA.

Independent Australia was set up because it was obvious that the nation's media was broken - even way back then.

And despite our work at IA - despite its longevity and strong popularity - and the work of other parvenu online publications, Australia's media is still broken. Back-snapped broken.

There are three main reasons why it is broken ─ all of which stem back to just one.

Firstly, Australia has the most concentrated media ownership in the Western World. This results in fewer voices and poorer coverage of critical issues. This is a danger to democracy.

Channel Ten is not insolvent - its voluntary administration is simply a ruse to allow Rupert to take over the rest of Australia's mainstream media.

Secondly, in Australia's case, our concentrated media is dominated by one utterly amoral media organisation, unabashed about its power to dominate and control Australian public opinion. This makes Australia less than a full democracy.

Thirdly, Australia's journalists are in absolute denial about not only #1 and #2, but that there is really any problem with Australia's media at all. They seem to believe they're all doing an excellent job and that their audience doesn't really understand journalism at all.

You are already reading Independent Australia, which means you are more intelligent and highly informed than most. You are already aware most of Australia's media is concentrated in the hands of just three organisations, the Big Three: Nine, Seven and News Corp.

You will also know that one of them, News Corp, controls over 65 per cent of Australia's newspaper circulation, as well as the nation's only cable network. You will know that this skews Australian media coverage, as the proprietors of News Corp - Rupert Murdoch and his family - have no compunction about bullying Australia's politicians and public into submission. This failed at the last election, federally, for the first time since 1973, but News Corp isn't going anywhere.

This gargantuan dominance makes our domestic reporting unreliable. There is no question about that and it is, indeed, generally agreed upon by most authorities.

Of course, IA has reported on these issues since 2010, in significant depth and clarity.

Dr Martin Hirst deconstructs the Federal Parliament's long overdue media reform bill, due to report back to the Senate in November.

Yet Australia's mainstream media journalists - the ones producing this skewed reporting - seem to be utterly in denial any problem exists at all.

In fact, if anything, the divide between mainstream media journalists and their audience has gotten wider over the dozen years since IA blinked into life online, if their usual public and noisy repudiation of adverse social media commentary and other audience comments are any guide.

It has gotten to the point where almost everyone else can see quite clearly what is going on - that Australia's political reporting is not fit for purpose ─ yet the vast majority of our working journalists appear to be in complete denial.

Why is this so?

Well, one reason is that it would be foolish to bite the hand that feeds you. If you work for Murdoch, are you likely to bemoan the pressure editors put upon you to pursue certain stories over others, censor your articles to pursue a particular agenda, or bully you to not stray from the company line?

If you did, you would be unlikely to have a job there for long.

And over time, you become used to the money and perks of being a loyal company dog. Stockholm Syndrome sets in and you begin to love your captors. Eventually, you can't even remember what you were like before.

But that would only cover the journalists working in the Big Three. What about the journalists outside these organisations, such as those in the ABC and the Guardian, for example? Most of them still do not acknowledge that there is any problem with Australia's media coverage. They, in fact, defend their colleagues working in the corrupt and concentrated media establishment.

With the alarming concentration of media ownership in Australia and the advent of PR driven journalism, for the sake of democracy, the public must support independent media. David Donovan comments.

In a recent excellent article by Dr Tim Dunlop, several journalism educators and working journalists were asked what they thought 'non-journalists don't understand about journalism [and what] they get most wrong?'

High-profile Indigenous affairs reporter for Nine's The Age, Jack Latimore, was quoted defending his profession from the ignorant masses.

To do this, Latimore cited his own idiosyncratic "clusterfuck machine/my Dad's a tiler" definition of journalism:

Gold stars to any "totally savvy media pundits" among you who might be able to decipher what this alleged professional communicator was attempting to convey.

While it might be convenient to think working journos like "Clusterfuck" Jack are just trying to defend their much-maligned profession and support their professional colleagues, the truth is much more banal. The real reason they don't see the problems with journalism in Australia is that they are trained not to do so. Even before they enter the profession, usually with one of the Big Three, journalists these days acquire journalism degrees, where they are mostly taught by - you guessed it - former journalists who spent most of their previous careers working for that same Big Three.

It is like a perpetual stew. It keeps bubble-bubbling and boiling away, and people go and dip the ladle and fill a new bowl, and add new ingredients to it from time to time, but it always retains the same essential flavour ─ one that gets even more overpowering and rancid with time.

YOU CAN'T SIT WITH US!

Secondly, with very few exceptions, journalism courses do not cover the structure of the industry, the legislative loopholes that allow the world's most profoundly concentrated media ownership or, indeed, even any mention of the name Voldemort, AKA Rupert Murdoch. Not even in most ethics subjects, incredibly.

Those lecturers who dare to question, or even more unlikely, criticise the system, are essentially chased out of it. We have witnessed this with the bold efforts of former Professor of Journalism Dr Martin Hirst, for example.

Freedom of speech: Not coming to a university near you

Assistant editor Michelle Pini discusses the notion of freedom of speech in light of the recent suspensions of academic professors Roz Ward and Martin Hirst.

At the same time, the endless co-promotion of the Big Three continues in such a way as to suggest that such a skewed worldview is perfectly normal, further ensuring the drowning out of any dissenting opinions by omission.

Like goats to the slaughter, kids just out of journalism school are dribbled into the media profession, trained mostly by News Corp and Fairfax (now Nine) staffers, who subtly groom them for a career of meek compliance ─ until they can't stand themselves anymore and leave. But then, there's always fresh meat to add to the pot.

Among those interviewed in Dr Tim Dunlop's abovementioned report, note the comments of Melbourne University journalism ethics lecturer, Professor Denis Muller, who worked for 27 years at The Age, prior to commencing his illustrious career in academia:

To paraphrase Dr Denis "Denuto" Muller, "We journos don't know what a good story is, but we know it when we see it! It's like, I dunno... the vibe!"

How Murdoch manipulates the climate of Australian politics

News Corp suddenly promoting climate change action is just another example of how the Coalition and the MSM operate in tandem to create and control the political narrative.

It's a complicated topic, which we will discuss in much more detail next week, with further examples. For now, suffice to say, none of the experts quoted by Dr Dunlop mentions Murdoch or Australia's media concentration, or provides any meaningful insights whatsoever into why Australians feel so out of sync with their media.

More concerningly, none of those interviewed by Dr Dunlop appears to have a clear understanding of why journalism is so important. Why it is called The Fourth Estate. It is because its role is to stand as a check against the other estates, by informing the public and speaking truth to power.

In Australia, it seems that journalists, if they think about it at all, see their jobs as being more in the field of entertainment. Coming up with a "good yarn".

Thanks, Alan! That statement might also apply to journalists who express opinions about why almost everyone thinks their profession is absolutely useless.

This editorial was originally published as part of the Independent Australia weekly newsletter. These editorials are usually only available to subscribers and may be read online in the IA members-only area.

What is really wrong with our media: The Eden Monaro example