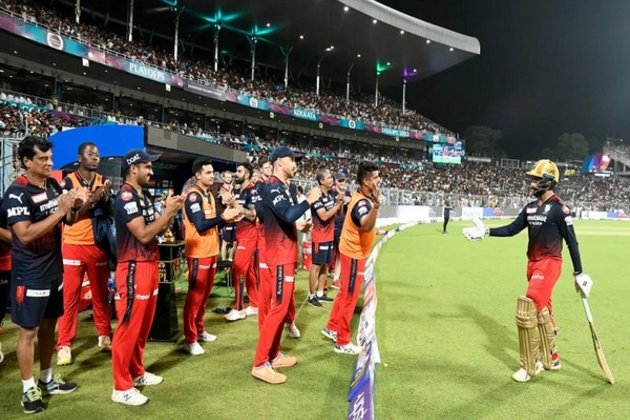 Kolkata (West Bengal) [India], May 26 (ANI): Rajat Patidar starred for Royal Challengers Bangalore as they defeated Lucknow Super Giants by 14 runs in the Eliminator clash of IPL 2022 here at Eden Gardens in Kolkata on Wednesday.

With this win, RCB will play against Rajasthan Royals in Qualifier 2 at Narendra Modi Stadium, Ahemdabad on Friday for a place in the final against Gujarat Titans.

Batting first, an unbeaten century by Rajat Patidar (112) and his 92-run stand with wicketkeeper batter Dinesh Karthik powered Royal Challengers Bangalore to a massive 207/4 in their 20 overs against IPL debutants Lucknow Super Giants.

It was a memorable day for the RCB batting lineup as they smashed the opposition hard. LSG had no answer for the show put up by the batters.

Chasing 208, Lucknow had a decent start as their score read 62/2 after the first six overs. Mohammed Siraj removed Quinton De Kock in the very first over after the SA batter smashed him for a huge six. De Kock mistimed on slog as the ball went straight to RCB skipper Faf Du Plessis.

Manan Vohra then joined LSG skipper KL Rahul on the crease and the duo started clocking runs on board. With the score at 20/1 after three overs, Vohra decided to shift gears as he gathered 17 runs off 4 balls before getting dismissed in the 5th over by Josh Hazlewood. Vohra departed for 19 off 11 balls.

KL Rahul gathered 17 runs from the last over of powerplay as LSG crossed the 60-run mark in the first six overs.

In middle overs, LSG captain and Deepak Hooda proceeded with caution as runs came in scarcity for them. RCB bowlers had the LSG pair on a string as they bowled on good length with great discipline and leaked minimum runs against Rahul and Hooda.

Between 7th to 10th over, the only one-time ball sailed into the stands and no boundaries were smashed by LSG batters during that period. Lucknow's score read 89/2 at the halfway mark in the innings.

The next three overs saw only a single boundary coming out of the bat of the LSG duo. With 17 balls since the last boundary, 99 runs were needed from the last seven overs for the KL Rahul-led side.

Rahul then shifted his gears as he reached his 43-ball half-century by smashing a six off Josh Hazlewood on the first ball of the 14th over before Hooda also thrashed the Aussie pacer for a maximum in the same over.

The 15th over of Wanindu Hasaranga proved vital for both teams as three sixes came from it for the chasing side but Hooda who smashed two of those maximums was removed by the SL spinner. Hooda departed after making a quick 45 off 26 balls.

In the next two overs, 24 runs came for LSG as the equation was down to 41 runs needed off the last three overs.

Harshal Patel then removed Marcus Stionis in the 18th over before Hazlewood struck twice in consecutive deliveries to dismiss KL Rahul and Krunal Pandya in the penultimate over.

24 from 6 were needed but Harshal Patel held his nerves to see through RCB across the finishing line.

Earlier, put to bat first by Lucknow Super Giants, Royal Challengers Bangalore were off a poor start as they lost the skipper Faf Du Plessis for a golden duck. Pacer Mohsin Khan continued his red-hot form as he sent the big fish back to the pavilion after he was caught behind by the wicketkeeper Quinton De Kock.

Compatriots Virat Kohli and Rajat Patidar now had the task to rebuild the innings after this hiccup in the first over. Both batters looked really good, taking LSG bowlers to the cleaners. Kohli hit two great boundaries. Patidar smashed pacer Avesh Khan for two fours in the fifth over and upped his aggression in the next over, smashing spinner Krunal Pandya for 4,4,6,4 in the sixth over.

At the end of powerplay in six overs, RCB stood at a solid 52/1, with Kohli (18) and Patidar (33) looking great. The duo soon brought up their 50-run stand. Avesh Khan gave his side a breakthrough in the ninth over of the innings, dismissing Virat Kohli for 25 off 24 after he was caught at the third man while attempting an uppercut. The 66-run stand between the duo was ended.

This brought Glenn Maxwell to the crease, who made his intentions clear by smashing spinner Ravi Bishnoi for a six in the 10th over. At the end of 10 overs, RCB stood 84/2, with Patidar (49) and Maxwell (8).

Patidar soon brought up his half-century, his second of the season off just 28 balls. However, at the very next ball, Maxwell was dismissed for 9 by Krunal Pandya after being caught at deep square leg by Evin Lewis.

This brought Mahipal Lomror to the crease. With a boundary, the batter helped RCB cross the hundred-run mark at the second last ball of the 12th over being bowled by pacer Dushmantha Chameera, followed by another four at the end of the over.

The duo continued rebuilding the innings before their 29-run stand was broken by Bishnoi after the batter was caught by captain KL Rahul at extra cover. Lomror was the one dismissed for 14 off 9.

Dinesh Karthik, the in-form batter was up next. He survived a catch attempt off a Mohsin Khan delivery in the 15th over. At the end of 15 overs, RCB stood at 123/4, with 39 runs being made in the last five overs. Karthik (5) and Patidar (66) had the task to give a boost to their side's score in the last few overs.

On the second ball of the 16th over, Patidar hit a six off a Bishnoi delivery. He continued his onslaught till the final ball of the over with 4,6,4,6, thus racing to 92 off just 44. RCB were at a commanding 150/4, with 27 runs coming from the over.

Karthik also joined Patidar and smashed three fours in the next over by Avesh Khan. The momentum had shifted to RCB, with 15 runs in the 17th over and 42 runs within the 16th and 17th over. The duo also brought up a quickfire 50-run stand in just 23 balls.

Mohsin was back in the attack next. Patidar survived a catch attempt and at the very next ball brought up his maiden IPL century off just 49 balls. Eight runs were conceded in the over, with fifty runs made in these three overs.

After surviving an LBW attempt off Chameera in the 19th over, Karthik took advantage of it by smashing a six and four next. Patidar also smashed a six and a four, with the over conceding 21 runs.

Avesh Khan came to deliver the final over and Karthik hit him for four. RCB finished off with 207/4 in their 20 overs. With 84 coming in the final five overs, a superb acceleration was delivered by Karthik (37) and Patidar (112), who put on an unbeaten stand of 92 runs off 41 balls.

Mohsin Khan was the pick of LSG bowlers with 1/25. Krunal Pandya, Avesh Khan, and Ravi Bishnoi got one scalp each.