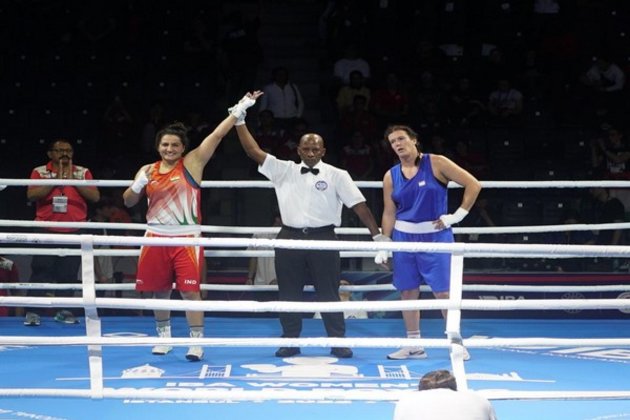 Istanbul [Turkey], May 13 (ANI): Two-time Asian Champion Pooja Rani (81kg) advanced to the quarterfinals at the 12th edition of the IBA Women's World Boxing Championships as she defeated Timea Nagy of Hungary by unanimous decision in Istanbul on Friday.

Pooja, who was playing her first international bout since Tokyo Olympics was aggressive right from the beginning and was landing accurate punches while moving swiftly in the ring. She looked in complete control throughout the bout and registered a commanding 5-0 victory to move to the next round.

Pooja, who hails from Bhiwani will take on Australia's Jessica Bagley in the quarter-final on Monday.

Lovlina Borgohain (70kg) ended her campaign at the World Championships as she went down fighting against Cindy Ngamba of Fair Chance Team in the round-of-16 bout. Lovlina played from the distance and tried to counter-attack but Cindy went on to secure a 4-1 split verdict in her favour over the Tokyo Olympic bronze medallist.

2017 World Youth Champion Nitu (48kg) and 2019 Asian Championships bronze medallist Manisha (57kg) will play their respective pre-quarterfinal bouts on Saturday. Nitu will face Spain's Lopez Del Arbol while Manisha will square off against Bulgaria's Svetlana Staneva for a place in the quarter-final.

This year's event, which marks the 20th anniversary of the IBA Women's World Championships, will be played till May 20.

In the last edition of the tournament, held in Russia in 2019, Indian boxers secured one silver and three bronze medals.

Indian boxers have won 36 medals, including nine gold, eight silver and 19 bronze, in the 11 previous editions of the tournament, which is the third-highest after Russia (60) and China (50). In the last edition of the IBA Women's World Boxing Championships, held in Russia in 2019, Indians concluded with one silver and three bronze medals. (ANI)