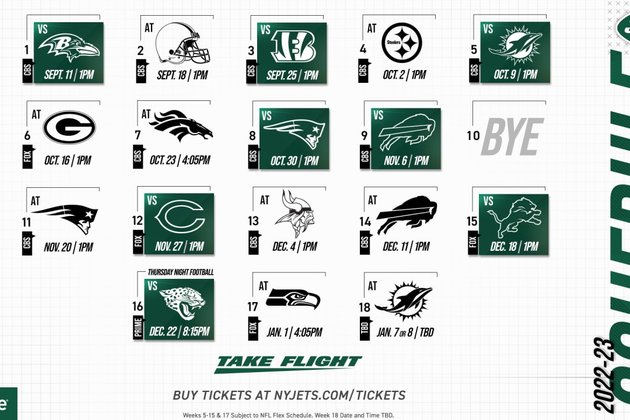 The AFC North has been one of the NFL's most competitive divisions for a long time. The Jets will find out early where they stand amongst the northern bruisers due to a scheduling oddity as the Green & White will face all four AFCN clubs over the first four weeks of the 2022 season. The Green & White will kick off the season at home for the first time since 2019 when they host the Baltimore Ravens on the 21st anniversary of 9-11 and later are scheduled for their lone prime time appearance on Thursday, Dec. 22 as they will welcome the Jacksonville Jaguars for a contest that will be streamed on Amazon Prime.

Just how rare is the Jets' early run in the AFC North? Since the Jets and the AFL fully merged into the NFL in 1970, the team has never played another division outside the AFC East in four consecutive games.

After the clash with the Ravens in Week 1, the Jets will travel to Cleveland for a road date with the Browns (Sep. 18). The following Sunday, they will host the defending AFC champion Cincinnati Bengals. To close their AFCN run, HC Robert Saleh will lead the Jets into Pittsburgh for a clash with the Steelers on Oct. 2. The Jets, whose bye falls in Week 10, will close their campaign the weekend of Jan. 7/8 in South Florida vs. the Dolphins.

The Jets will have the honor of playing at home on 9-11, 21 years after the terrorist attacks that caused nearly 3,000 fatalities in addition to tens of thousands of injuries and long-term health issues. On Sep. 11, 2001, two Boeing 767 jets flew into the Twin Towers in New York City as nearly 2,200 civilians lost their lives in and around the World Trade Center. On that Tuesday, Jets head coach Robert Saleh's brother, David, who was working on the 61st floor of the South Tower, made it out alive and months later Robert moved away from the financial industry and followed his passion of coaching football.

This will be the third time the Jets have opened at home on 9-11 since the attacks.

After their AFC North swing, the Jets will get their division slate under way (I prefer 2 words but your call) with a home date vs. the Dolphins on Oct. 9th. After the swim with the 'Fins, they'll later have a three-game division run, beginning with home dates vs. the Patriots on Oct. 30th and Bills on Nov. 6th followed by their bye and then a return engagement with the Pats at Gillette Stadium on Nov. 20th. The Green & White will battle the Bills in Buffalo on Dec. 11th and finish the regular season at Hard Rock Stadium.

Saleh recently said about the AFC East: 'The idea of closing the gap isn't necessarily trying to combat what they have, it's trying to get better with what we have, adding pieces, adding players and developing those players... I think there's a clear vision for every single player that we bought in from free agency to the draft and now it's just going out on the field and implementing that vision and getting those guys to play to the best of their ability."

Starting with a Week 12 home date vs. the Chicago Bears on Nov. 27th, the Green & White will embark on a stretch of three of four against NFC North opponents. The Jets will travel to Minnesota to face the Vikings on Dec. 4 and then host the Detroit Lions in Week 15 after their road date in Buffalo. Both the Jets (National) and the Lions (American) coached in the Senior Bowl, and in the draft, the Lions picked Michigan DE Aidan Hutchinson No. 2 overall and the Jets grabbed CB and Detroit native Ahmad 'Sauce" Gardner with the No. 4 selection.

The Jets have kickoff times scheduled for 1:00 p.m. in 13 of their first 14 games. The only exception is a Mountain West trip to Denver in Week 7 as Jets-Broncos will begin at 4:05 EST. After hosting the Jaguars on the Thursday night before Christmas, the Jets will get 10 days before a trip to Seattle and a New Year's Day tilt with the Seahawks that will start at 4:05 EST.

Over a four-game stretch between Oct. 16 and Nov. 6, the Jets could line up against three MVP candidates in Aaron Rodgers at Green Bay (Week 6), Russell Wilson at Denver (Week 7) and Josh Allen when Buffalo visits in Week 9. Rodgers is a four-time NFL MVP and has captured the award in both 2020 and '21, Wilson is a nine-time Pro Bowler who was traded to the Broncos in the offseason, and Allen last season threw for 4,407 yards and 36 TDs and ran for 763 yards and 6 TDs.

While the Jets will match up with a number of elite passers, they are excited about QB Zach Wilson, a talented signal-caller entering his sophomore campaign.

"I've watched a lot of film watching him and I'm expecting him to make huge strides this season," said veteran TE C.J. Uzomah, who will see his former Bengals teammates in Week 3. "We've been asking each other questions. He's a smart kid, he's young, he's an unbelievable player with an unbelievable football mind."

It will be interesting to see what the Jets' record is through their first nine games as five of those games will come against 2021 playoff participants - vs. Cincinnati (Week 3), at Pittsburgh (Week 4), at Green Bay (Week 6), vs. New England (Week 8) and vs. Buffalo (Week 9) - and that does not include Lamar Jackson and the Ravens' challenge in Week 1. But after the Week 10 bye, the Jets will face a Patriots club in Week 11 that was 4-5 at home last year and then follow that up with five of six against teams that finished under .500 in 2021: vs. Chicago (Week 12), at Minnesota (Week 13), vs. Detroit (Week 15), vs. Jacksonville (Week 16/Thursday night) and at Seattle (Week 17).

Seven of the Jets' 17 games will be against 2021 playoff teams as they'll have their annual two-game sets with the Bills and Patriots in addition to the home game against the Bengals and road dates at the Packers in Green Bay as well as the Steelers in Pittsburgh.