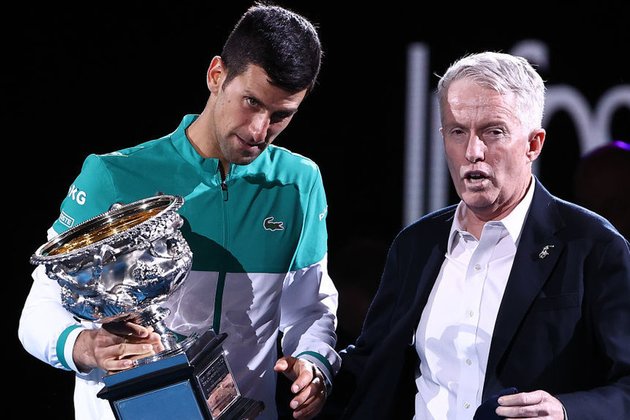 Australian Open boss Craig Tiley has largely stayed out of the limelight in the week since Novak Djokovic's deportation from Australia was rubber-stamped by Scott Morrison's government, resulting from Minister for Immigration Alex Hawke's second attempt to cancel Djokovic's visa because he had not been vaccinated against Covid.

Speaking about the fiasco on Australian television, Tiley said that he considers the matter to be closed and doesn't expect any further legal wrangling before the courts.

"No," Tiley told ABC TV via MSN when asked if he thought it likely that the world number one would file legal charges against Tennis Australia as had been speculated in the British press.

"There are going to be lots of reports on different things but we are in a position where we are focused on delivering an event right now and we will continue to deliver a great event."

Djokovic's immigration standoff with Australian authorities gripped the sports world and came close to being a fully-fledged international incident between Australia and Djokovic's home country, prompting accusations of harassment from the Serbia government when the unvaccinated star was detained in Melbourne on two separate occasions despite having believed he had been granted a medical exemption to compete at the tournament.

Djokovic was chasing what would have been a record 21st Grand Slam win, as well as a tenth Australian Open title and fourth successive triumph at the tournament.

Despite the scandal, Tiley says that he expects to see Djokovic back at the event next year.

"Yes," he said when pressed on whether the Serb will return in 2023. "Obviously, I think he's got to play out this year, but that will be his intention. At the end of the day, he's the number one player in the world and he loves the Australian Open."

Certain immigration questions do linger, however. Australian law states that any foreign national whose visa is revoked is barred from entry for a period of three years, although that can be overturned on compassionate grounds - or if the person's entry is deemed a benefit to Australia's national interest.

Tiley, meanwhile, wasn't quite so forthcoming on questions as to why Tennis Australia appeared to ignore information from health officials which stated that a person who had overcome a recent Covid-19 infection, as Djokovic's application stated, were not considered to be fully vaccinated.

"It's important to know we have always tried to do the right thing," he said. "We were at the beginning of Omicron and that's why we were constantly seeking clarity and there was a lot of complexity and contradiction of information before, after and there continues to be all the way through.

"We tried to do the right thing... leading into the event were forever-changing conditions.

Tiley, who has been pilloried by Australian Open attendees over the last week, added that he has no intention of stepping down from his role - and while he says he was "shocked" when Djokovic was detained by authorities, he argues that the fundamental goal was to safeguard the health of Australian citizens.

"What we constantly sought was clarity because our goal is always to do the right thing - to make sure that Victorians are safe," he stated.

The tournament continues until January 30 2022.