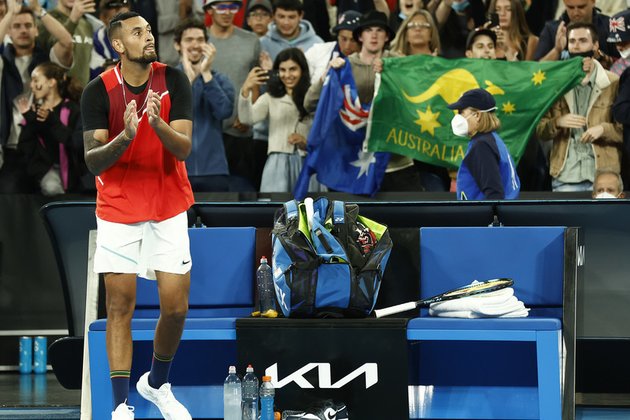 Russia's Medvedev must brace for Australian Open zoo against Kyrgios

Daniil Medvedev will have to contend with a febrile Melbourne crowd when the Russian meets home hero Nick Kyrgios in the second round of the Australian Open on Thursday.

As if Melbourne wasn't sweltering enough from the summer heat and simmering tensions surrounding the deportation of Novak Djokovic, throwing the ever-entertaining Kyrgios into the mix was always going to be combustible. 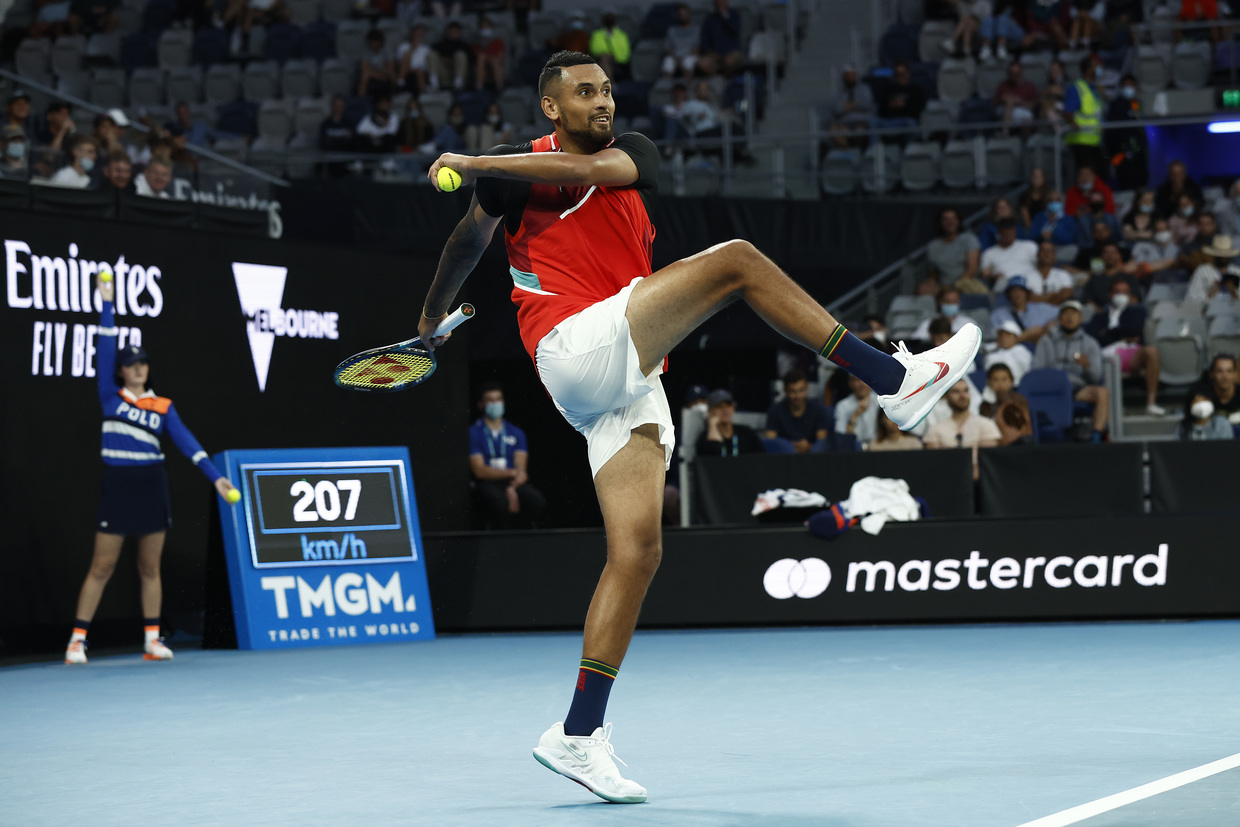 Kyrgios was at his crowd-pleasing best on Tuesday. � Getty Images

The Aussie firebrand's appearance had been in doubt after his positive Covid test on the eve of the tournament, but Kyrgios and his following will already be glad he didn't miss out.

Indeed, it took Kyrgios all of two games of his first-round meeting with Liam Broady to break into his box of tricks at John Cain Arena on Tuesday, pulling off an audacious underarm 'tweener' serve which befuddled his British opponent and beguiled the home crowd.

More antics followed from the 26-year-old Aussie entertainer in a performance which showcased his spellbinding set of trickshots but also the more serious threat he poses when he gets his big-serving game together.

By the time the contest was done, Kyrgios was a straight-sets winner and the crowd was in raptures - so much so that Kyrgios himself even had to implore the match umpire to try and keep a lid on it for Broady's sake.

The Brit had been a good sport but gave an insight afterwards into what it is like playing the mercurial Kyrgios on his home turf.

"It was pretty crazy out there," said Broady.

"Everyone was telling me, like 'Oh you'll really enjoy it, it's going to be amazing'. But I thought it was absolutely awful... 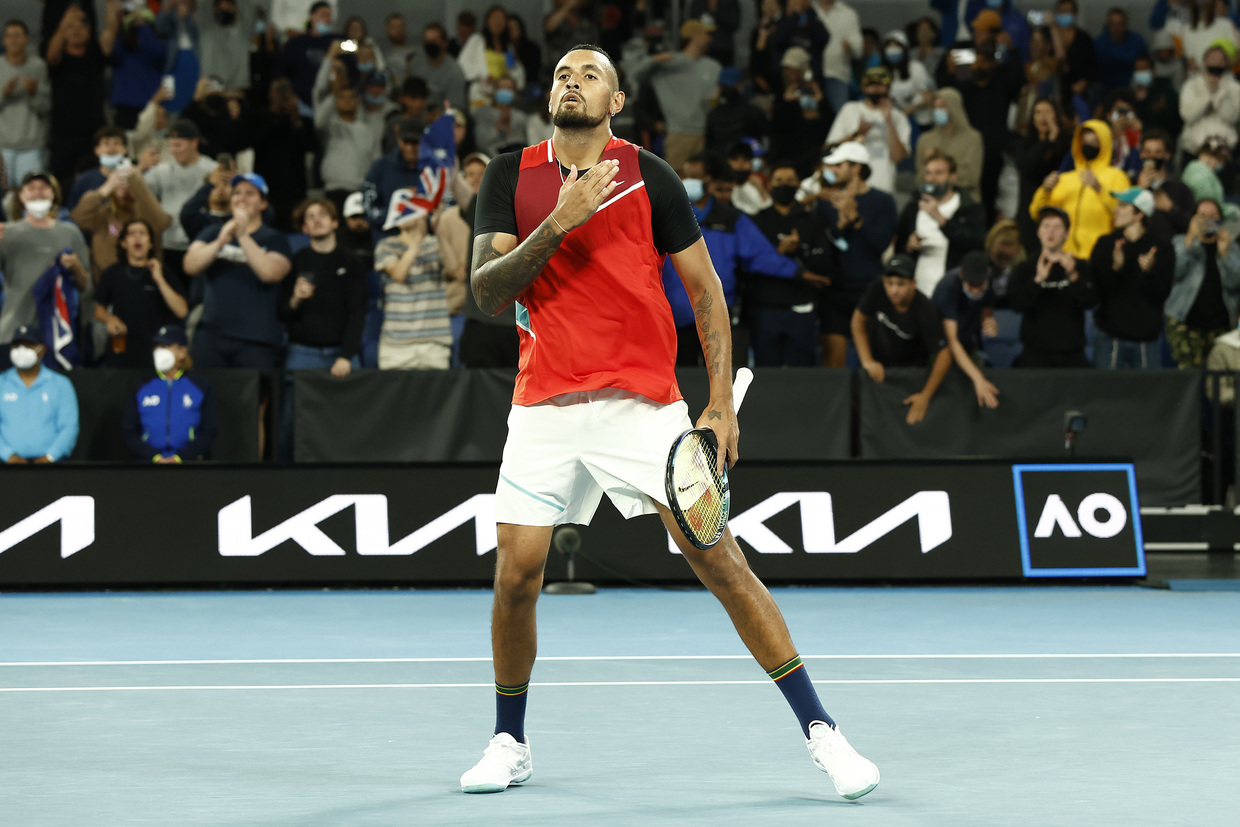 Kyrgios is one of tennis' biggest entertainers. � Getty Images

"You get sledged from the sides like you can't believe - they don't pick up on TV.

"So it was a very, very difficult atmosphere to try and handle and, like I said, he's incredible at getting them behind him and he plays better for it," added the 28-year-old.

Kyrgios is undeniably a master at whipping up the home crowd into a frenzy.

After using his post-match interview to tell the Melbourne support they were a "zoo," Kyrgios ended his appearance on Tuesday by sipping beer from a fan's cup courtside.

It was a case of 'cheers' all round.

This the inferno into which Russian second seed Medvedev is likely to step when he plays Kyrgios at Rod Laver Arena on Thursday, in a match scheduled to start around 19:00 local time.

Ironically, Kyrgios had implored Tennis Australia bosses to put the clash on John Cain Arena, which he sees as something of a lucky charm, but the atmosphere nonetheless promises to be fiercely partisan at Melbourne Park's main court.

Firmly installed as the tournament favorite now that top seed Djokovic has been forced to pack his bags, Medvedev knows he faces a major early test of his mettle.

"He's definitely a character and you know, I think probably like almost everybody in the world, there are some things I adore in what he does and some things I don't like," Medvedev said of Kyrgios, after the Russian earned a routine first-round win of his own against Switzerland's Henri Laaksonen.

"He's kind of going to extreme all the time when he's on court, that's why people love to watch him.

"Even if they hate him, they love to watch and that's his strengths."

Adding to the fervent home support, Kyrgios can perhaps draw upon a psychological edge from knowing he has beaten Medvedev in both of their previous meetings - the last of which came in the final of the Citi Open in Washington in 2019.

For his part, Medvedev has come a long way since that match - and now has the honor of calling himself a Grand Slam champion after his maiden major crown at the US Open in September.

Medvedev has famously deployed crowd tactics of his own in recent years, engaging in a running battle with New York audience on his way to the final at Flushing Meadows in 2019.

That was used as fuel to fire him up, even though he's equally been prone to on-court meltdowns on more than one occasion. 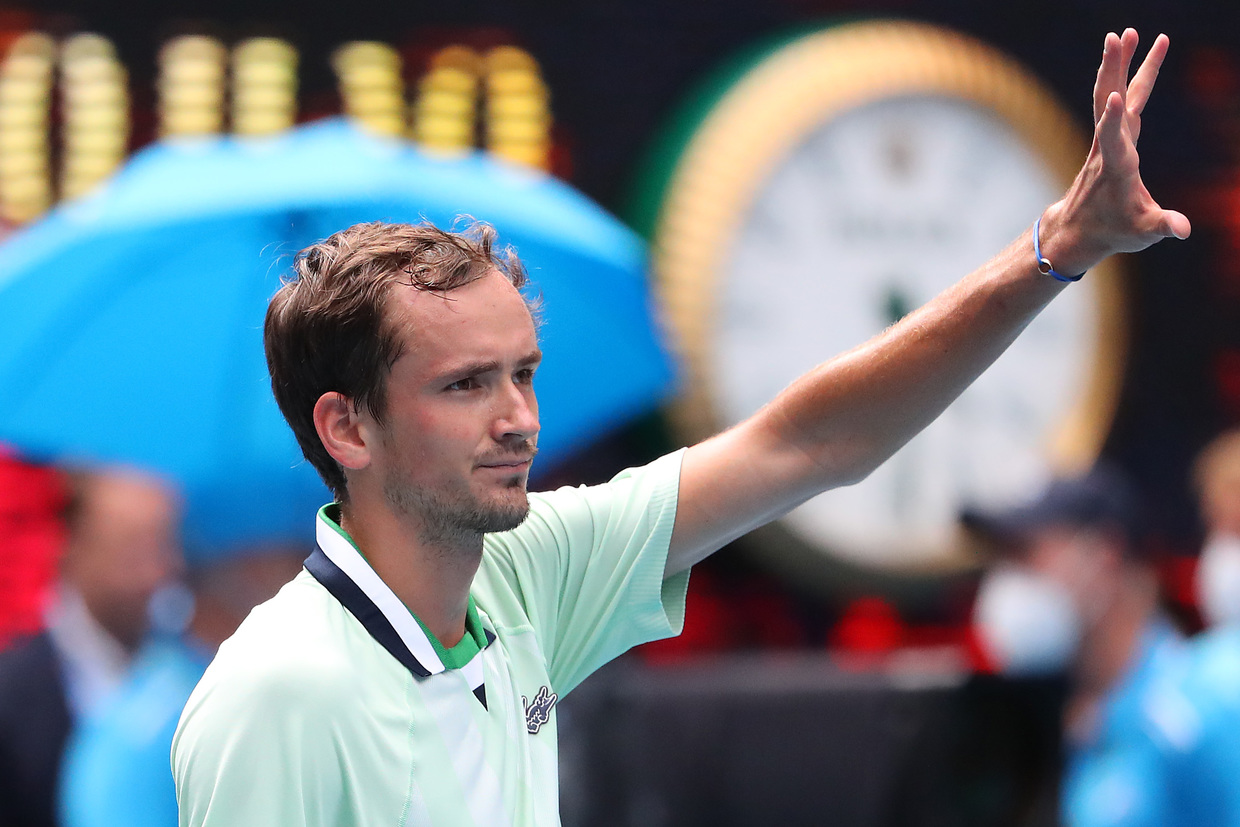 But at 25 and with considerable Grand Slam appearance now under his belt, Medvedev is inarguably much better equipped to deal with a potential blast furnace come Thursday.

That will be just as well if Kyrgios does find his groove - and gets the crowd pumped up in the process - as Medvedev will need all his nous and playing qualities to emerge from a tricky first-week assignment Down Under.